It’s snowing in Tokyo. I don’t like it. It looks beautiful and picturesque but the whole thing is just a nuisance to contend with – especially since work is already feeling like a royal pain in the backside these days. When I was a kid – I was enamoured by snow – but these days I just don’t care for it.

“Does it snow in Singapore?” my British penpal would cheekily ask me in every monthly letter exchange.

It was incredulous for her to believe that we Singaporeans don’t have four seasons. My tiny island country is comfortably nestled near the equator. In Singapore, it’s either hot or very hot. End of story. During the monsoon months it rains a lot, but nothing compared to the terrible typhoons of Japan.

Growing up, I often dreamt of Christmas snow. The romantic kind you see in the movies where people sip of eggnog and open presents by the fireplace. I’d never had eggnog, but its creamy appearance was incredibly appetising. Mmm mmm mmm. It looked sweet and yummy and I wanted nothing more than to have some.

I often dreamt of touching snowflakes – each individual snowflake handcrafted like a thumbprint that would melt the moment you touched it. There was something mysterious and magical about seeing a landscape covered in pure white. After all, my home city is a garden city that’s always draped in a lush shade of tropical green.

Whenever it was time to pick a holiday destination, I would always pick one of the cold countries. As I got older, I realised that obvious quintessential truth – visiting someplace is a whole different ballgame to actually living there.

The first time I grappled with enormous amounts of snow was in Montreal. Yes – it snows in many countries – but Canadian winters are brutal. It just goes on and on and on… The streets are deserted. You rarely see people walking on the streets. The people you do see are so heavily decked out in winter gear that the only thing you can really see are their eyes. The pedestrian walkways are doused with salt daily. A tractor shows up each morning to shovel snow off the streets.

After one week in Canada, I was ready to go home.

Thankfully, it doesn’t snow much in Tokyo. It’s snowed a grand total of three times since I moved here some two and a half years ago. And yesterday’s snowfall was the biggest. I was in the middle of teaching a lesson when it started snowing. My students stopped listening to me and promptly rushed to the windowpanes to stare at those magical specks of white falling from the sky. The next thing I knew, some of them had opened the windows and stuck their hand out. They were collecting snowflakes and studying them. I’d done the same at their age – but how quickly the novelty had faded for me. 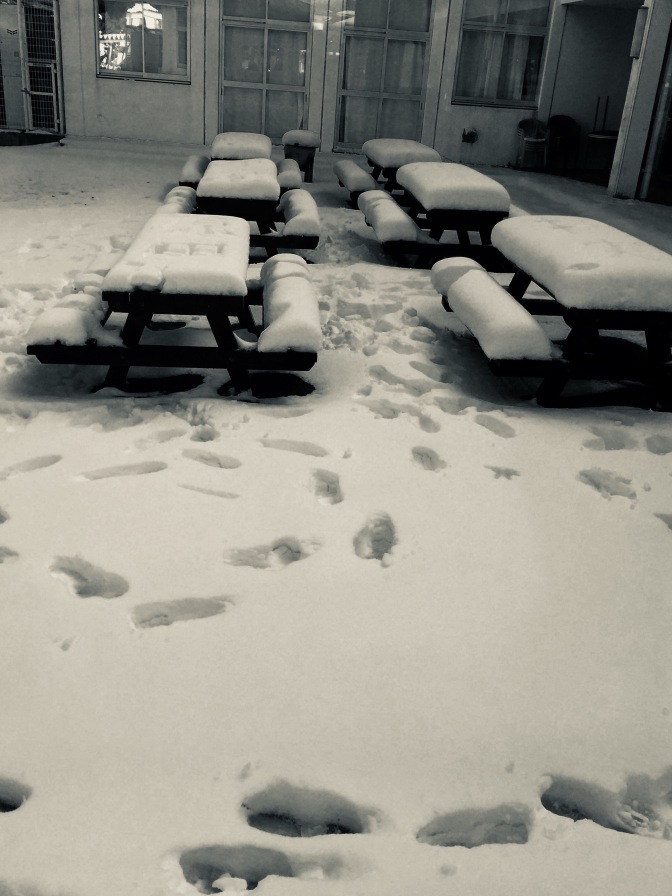 Whilst they basked in Mother Nature’s natural miracles, I took a deep breath and contemplated all the public transport delays and the hellish walk home. I secretly wished they would just cancel work for the next two days – but this is Japan. Work – even if it is unproductive work – always comes first.

On the way home, I noticed how the same old landscape that I’ve grown so accustomed to had changed so drastically. Everything was submerged in white. I’m someone who generally walks very fast – so I had to slow down to make sure I wouldn’t slip, fall down and break something.

Despite how white and clean snow looks, everything gets dirty reaaaaallly quickly. And before you know it, it’s all muddy, slushy and gross. The puddles of grey water are everywhere. YUCK YUCK YUCK.

Anyways – I’m home at the moment. I’ll have to leave for work again in a couple of hours. Thankfully the snow is slowly melting. Bye bye little magical flakes. You will not be missed.

3 thoughts on “Tokyo Snow and Canadian Winters: musings from an island girl”