Start typing and press
Enter to search
Skip to content

No plan? No problem. That was my motto when I first started travelling solo close to a decade ago. After many foolish mishaps, I’ve slightly tempered that devil may care philosophy. I have no doubt that age and experience have something to do with it… These days, I’m more of a planner than I used to be.

But that doesn’t mean my plan is any good.

Unless we’re talking about Taiwan, China, South Korea and the Philippines – flight tickets to and from Japan tend to be quite expensive. Isolated country and all that. Japanese tourists also tend to travel with tours as opposed to going at it solo. So unless you book super early – flight prices for the holiday season tend to be waaaay too expensive.

Add to that – my company didn’t give me my holiday dates till mid-July so when I finally sat down to book my flight tickets, I was just sitting there shaking my head. I’m just not the kind of person that wants to drop a whole load of money on a flight ticket – even if I do have the money. I’d rather suffer for ten hours (or more and Lord knows I have) and spend that money when I get to the destination.

After A LOT and I do mean A LOT of searching – I found a bargain ticket with Qatar Airways. I was also the last person to buy the ticket at the discounted price. Not bad, eh? Most of these flights come with an overnight layover – which didn’t seem like a big deal at the time. Check into a hotel, do a little sightseeing and then get on the next plane… Right?

So that was the plan.

The Journey to Narita Airport

This was my third time taking the Narita Express. I must say – I love it. Spacious, quick, fast and convenient – it took only one and a half hours to go from Yokohama to Narita Airport. Pretty neat, eh?

It seems that most of the people I talk to about this train service don’t seem to know about it. Many people also prefer to take the bus for some bizarre reason. The bus costs almost the same AND you have to walk around for ages to find the bus stop AND you have the luxury of getting stuck in traffic. Yippie! Why does anyone bother with the bus when Narita Express can come to the rescue?

At around 6500 (US$60) for a return ticket, I think the Narita Express train is a bargain considering what you get. The seat is reserved; so you don’t have to hustle people with your suitcase just to get a seat. It’s direct – so no pesky train changes at Tokyo Station. There’s even a toilet on board in case you need to go. Hey – when nature calls…

By the way – what do you think of my suitcase and matching toenails?

I was enjoying my train journey when a family of four got on at Tokyo Station. And just my luck – the two little children were sitting behind me. They made their presence known with their incessant chatter, kicking and giggling. The teacher in me just wasn’t in the mood to tolerate their nonsense on my day off. The teacher in me also didn’t want to scold someone else’s children when I’m on holidays. Parents can get super defensive about strangers giving their kids a nice well-deserved telling off. To be honest, I just simply couldn’t be bothered with the whole debacle. Anyways – given the way the kids were behaving, I knew a minor mishap was on the horizon pretty soon.

So I put on my earphones and continued watching Merlin. The train’s wifi was kind of choppy but it was OK. Five minutes later, the little ones spilled a bottle of soda all over the train, dirtying the entire carriage. I told you so… The next thing I knew – the mum was yelling at the kids. Well – it’s a little late, but hey – I totally saw that one coming…

I don’t like Narita Airport. It’s old-ish and boring compared to Haneda. The options for food, cafes and bars are extremely limited and for some bizarre reason everyone was still speaking to me in Japanese. Err… why? But then again – I realise I stopped being a lost and confused tourist a looong time ago. A year working and living in the Japanese countryside will smack that ‘I-don’t-know-what-I’m-doing’ expression out of you.

“Residence card and passport,” the lady at the counter says when my turn to drop off my baggage finally arrives. How did she know? Most Japanese people think that all foreigners are tourists.

“I’ve got an overnight layover in Doha,” I tell her.

“You can’t collect your checked-in luggage in Doha,” she says. “It’s going straight through to your final destination.”

“Your ticket does not allow you to collect your luggage at Hamad International Airport,” the lady says.

What kind of ticket is this?

So the next thing I know, I’m opening my beautiful green suitcase and taking out some sunscreen, underwear and deodorant. Due to current airport safety regulations – I can’t bring my toiletries and makeup bag with me on my carryon luggage… And I am not pleased about this. Whilst I know the hotel I’ll check into will have certain amenities – we women tend to be picky about such things and a part of me is seriously irritated.

Once check in is done – I grab an overpriced meal at a Chinese restaurant. It looks better than it tastes.

I don’t think it’s my first time flying with them. I believe I flew with them once – some twelve years ago. But my memories are foggy. From memory, it was a decent flight. At 30kgs, the checked-in baggage allowance is generous. Not that I’m carrying that much stuff… But I might indulge in some shopping on my trip… 🙂

The Tokyo – Doha leg of the journey is an overnight flight. How fun? I don’t know anyone who likes long haul overnight flights. And although I love love love travelling; flying is the bane of my existence. I bloody hate it. Thankfully – I’m the kind of person that can sleep anywhere. And although I manage to get some sleep on the plane, it wasn’t the restful kind. I was tossing and turning and shifting about the whole time. I felt a little sorry for the guy sitting next to me.

When I finally arrive in Doha, it’s 2am or so. I’m grumpy from the overnight flight. I’m also a little worried about how smoothly things will go on the ground. I’m currently travelling on my own (although that will change in a couple of days). Suddenly, I’m a little unnerved about all the things I need to do.

I’ve done my research, but will things go smoothly? The airport is so quiet I kind of feel like I’m in a ghost town. Almost everyone working here is male. Most women are travelling with their families and I don’t see other solo female travellers.

I stand in the line to buy the Visa on Arrival which costs QAR100 (US$28). The customs officer asks me where I’m staying for the night and that’s the beginning and end of our conversation. And then it’s off to the currency exchange to get some QAR. The whole thing was a relatively painless process. ALSO – if you retain the receipt, you can bring back whatever QAR you have left at the end of your journey and get back your original currency without a second conversion charge. Pretty convenient, if you ask me.

And then I’m off to the taxi stand to grab a taxi. A couple of people approach me on the way to the designated pavilion, but I ignore all of them. The recommended taxi service is Karwa: which is managed by Mowasalat, a Qatari state-owned company. It was a clean, easy and efficient twenty minute ride to my accommodation for the night. It costed around QAR50 (USD14).

It was 3am by the time I arrived at Retaj Royale Hotel. Arriving in the middle of night is not something I’m fond of doing – even when it’s a country I’m familiar with. So the fact that I had to do it all on my own in a country that I’ve never been… Let’s just say I was a little nervous.

Nevertheless, everything worked out just fine. The gentleman who checked me in was from Kenya. He was warm, hospitable and extended my checkout time. A part of me was relieved that I didn’t have to deal with the exceedingly long and complicated Japanese Keigo that I’ve grown so accustomed to. And then I was off to my room.

I’ve stayed at many many nice hotels in Japan, but they don’t even come close to Retaj Royale. Firstly – there’s LOADS and I do mean LOADS of space. Even the really nice places in Japan are nowhere as spacious.

And a bed! Wow… the kind of things I get excited about these days… And it was EXACTLY my kind of bed. Soft, yet firm. It was like sleeping in the clouds with a firm floor underneath. And I’m also digging the huge bath.

I had every intention of sleeping in, but my eyes flickered open at 6.30am Doha time. So I took a shower and headed down for breakfast.

I’m a HUGE and I do mean HUGE fan of hotel breakfasts. All you need to do is have a cheese tray, loads of bread and salad and I’m happy beyond words. Add to that – a Middle-Eastern breakfast? I was beyond words. It’s been ages since I’ve had Halloumi, Feta, olives, pita bread and the like. Although these things are available in Tokyo if you know where to look – they’re also ridiculously overpriced and like I said earlier – I don’t like overpaying for things. I spent around an hour eating breakfast. I also went through some three cups of coffee. 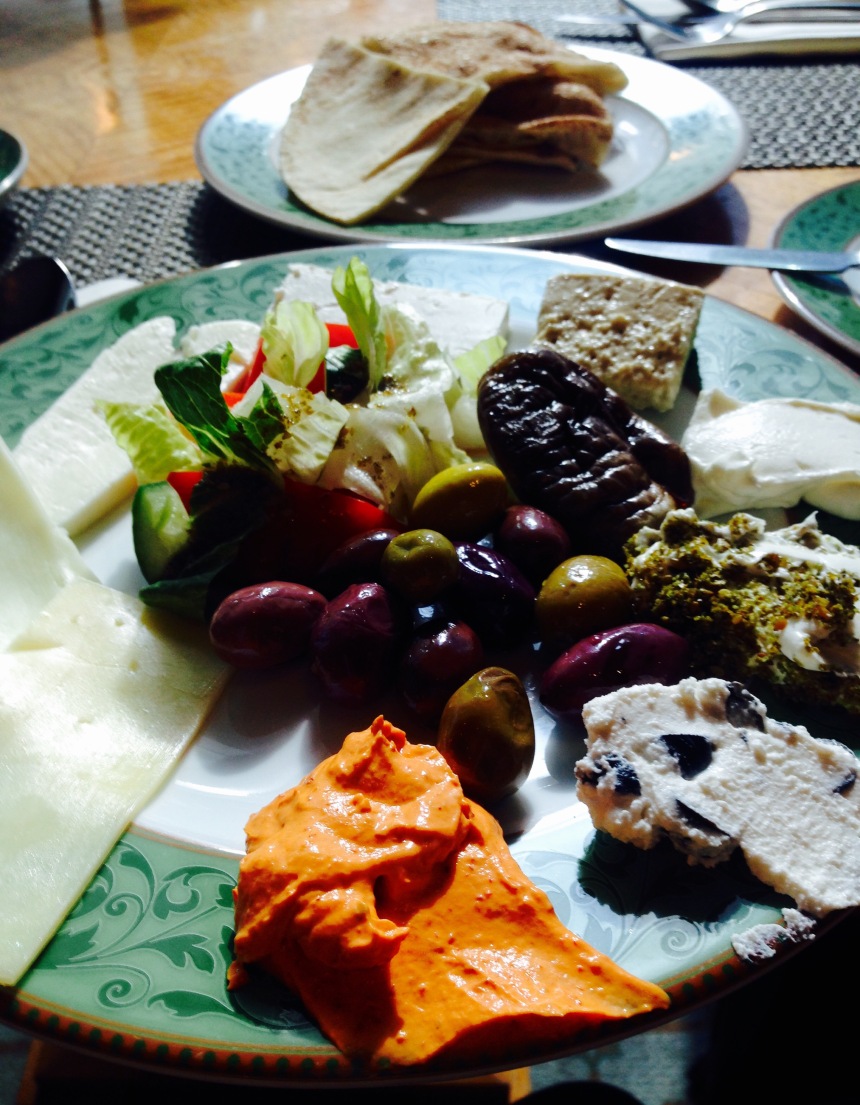 Well… now I’m back in the nice bed in my hotel room. It’s Friday morning – which in Middle Eastern countries is a holiday and that means that everything is closed. There is no hustle. There is no bustle. I have to wait till midday before everything reopens – which is why this blogpost is so long. I tried to book a city tour, but the Qatar Airways office doesn’t open till 1pm. 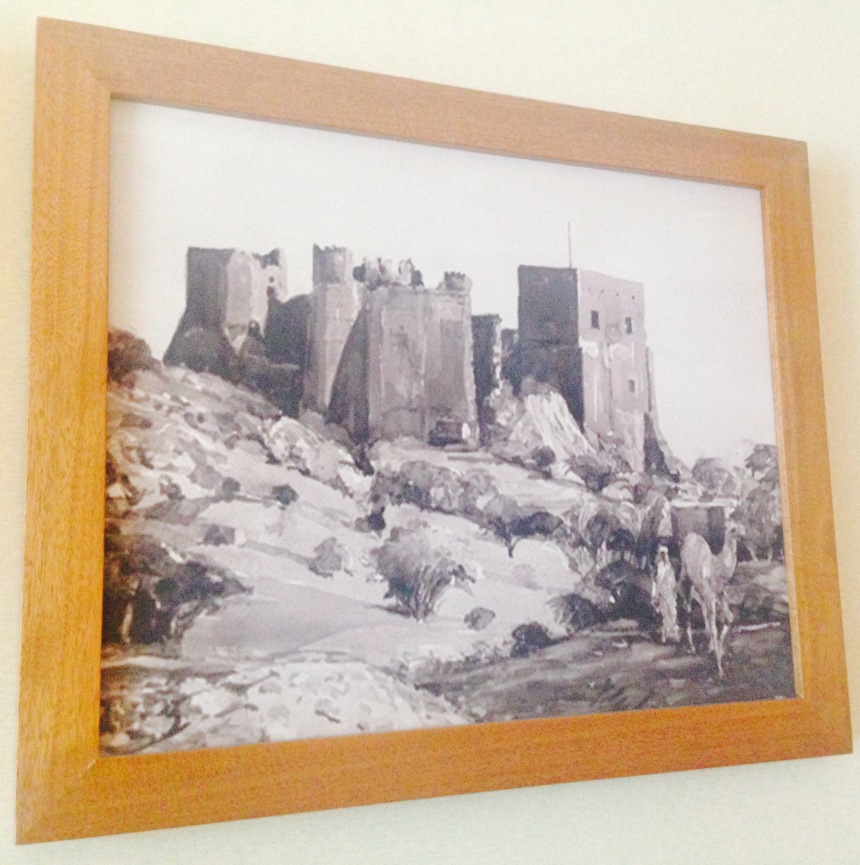 In Japan, I barely get the time to rest, so I’m kind of happy to have it forced onto me out here. I’m going to make another coffee and enjoy a couple more episodes of Merlin before checking out. Hopefully, I get the chance to see a bit the city before I leave.

4 replies to Tokyo to Doha: the long layover journey