The sakura live very short lives. They bloom to mark the end of winter and then they are gone. The whole process last two weeks, three if you’re lucky. In Japan, sakura season is a time for nostalgia, hanami flower-viewing parties and reliving bittersweet memories.

Which brings me to my tarot card for the day. The DEATH card. If there’s one card no one ever wants to see in a tarot reading, it’s this one. And no – it does not mean you’re going to die. Coincidentally – the Death card is also unlucky number 13 in the tarot deck.

This card doesn’t refer to actual death, but the end of one season so another one can begin. If you look at the card closely – you’ll see that regardless of gender, social standing or age – when it’s time for something to end, there’s very little you can do about it. Death comes and takes with him everything he’s meant to.

In Japan, the sakura mark the end of winter and the beginning of spring. Unfortunately, the sakura are late this year. Everyone here is waiting around for the sakura to bloom, but they’re taking their time… Mother Nature is doing what she does best – confusing the crap out of us.

We were meant to have a BBQ on the balcony today, but we ended up having it indoors because it’s raining… Ah well – we do what we can.

It was exactly my kind of party. The booze flowed freely, there was enough food to feed an army and everyone was plopping food on my plate without asking me if I wanted more. 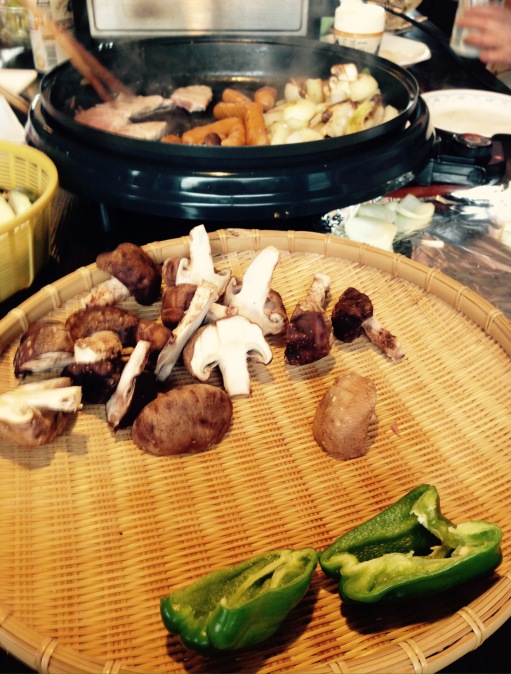 Man, have I missed the house parties. I’ve hosted a gazillion of these myself. But it just hasn’t been the same since coming to Japan. Japanese people are generally very private about their homes and don’t quite let people in. Most people look at me like I’m nuts when I invite them over. If they do decide to come around – don’t expect an invite back.

ANYWAYS – today’s house party didn’t consist of those kinds of people. The vibe was welcoming, easygoing, spirited and fun. I’d missed it. Having that family vibe. Everyone talking. Relaxing. Letting go. Having a good time. At some point, I realised I was sitting with the old boys’ club. They were all talking about Trump so I excused myself to the kitchen where all the women were arguing about whose recipe is best to cook something…

I don’t care whose recipe this is. It’s delicious and that’s all that matters.

In Japan – never empty your glass if you don’t want someone to pour you another one. The predictable exclamations of – tsuyoi des ne you’re a strong drinker – filled the room midway through the party. Almost everyone was red and I wasn’t. Considering the amount of food I was eating and the amount of water I was drinking on the sly – there was no way I was getting drunk.

Steamed oysters, baby. YUM! The food was absolutely outstanding. To be honest, I ordinarily leave house parties in Japan with my stomach half empty, but these hosts weren’t having it.

There was yakiniku on the grill, scallops on the fire, pickles, grilled vegetables etc etc.. Oh dear Lord – what a glorious meal to live through. But I know this meal is transient, fleeting and momentary: like the sakura.

The cherry blossoms are nature’s gift to us for surviving the winter. The sakura are too beautiful to last more than three weeks. They remind us that things come into this world to die. That does not mean that we can’t enjoy their exquisite beauty while they last.

Don’t fear the Death card in the tarot deck. What is born, must die. And what dies, will one day be reborn.

See you next sakura season. Although, I must admit, I have a feeling I won’t be here…